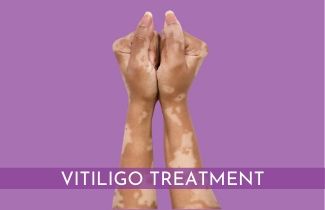 Vitiligo is a skin condition that causes white patches of skin to appear on various parts of the face and body. The disorder can also cause hair to lose its pigment and turn white. The condition can affect people of any race but is more noticeable in people with darker skin and hair.

General vitiligo is believed to be an autoimmune condition, which means the immune system mistakenly attacks pigment-producing cells (melanocytes).

The condition affects up to 2 percent of the world's population. Vitiligo is not contagious.

At Royal Lush we use most effective treatment in the World called Melanocyte Transplantation:

Melanocyte transplantation Is Also known as Non-cultured Melanocyte-Keratinocyte Transplantation Procedure (MKTP) is the latest modification in the surgical management of Vitiligo/Leukoderma. It involves separating skin cells from normal skin and transplanting on white spots as a cell suspension after removal of the upper layer of skin superficially. It can be performed in 1 to 3 hours as a day-care procedure.

In this treatment, largely affected lesions can be treated. The cosmetic results achieved are superior to other surgical methods such as skin grafting and punch grafting. Moreover, the difficult to treat areas like bony surface, areola, genitals and knuckles can also be treated with excellent results.

Book an Appointment
Other Treatments

What are the Main Travel Beauty Essentials?